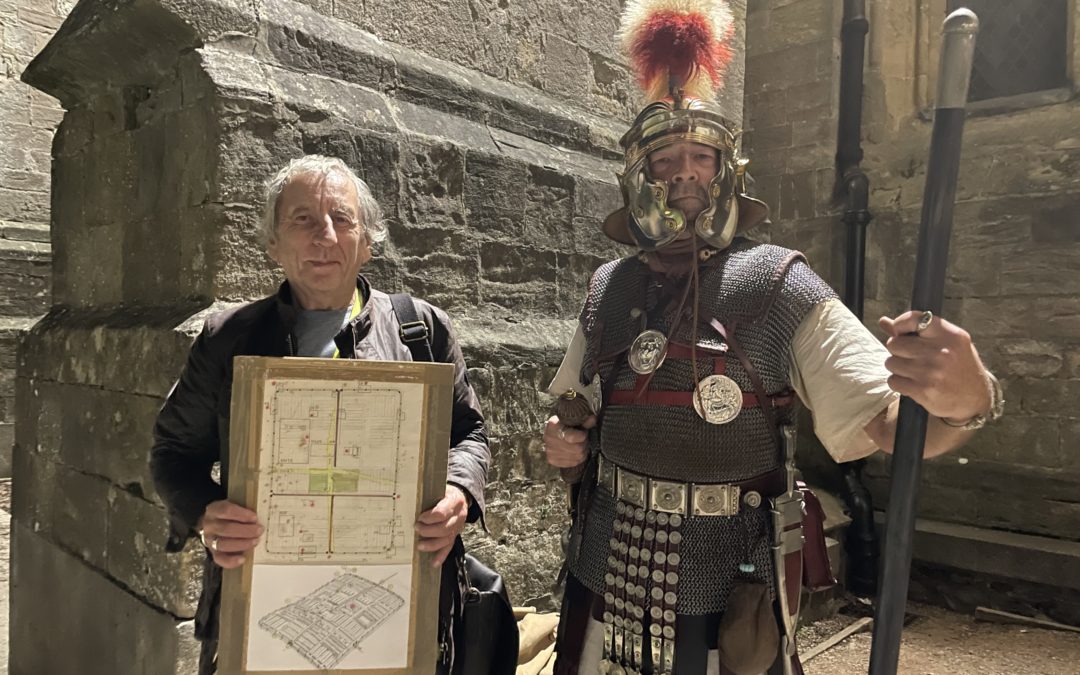 The first event was A Guided Walk Around the Fortress of the Second Augustan Legion at Exeter with Dr. John P. Salvatore. This tour evolved out of a celebratory coffee with John, who has worked 50 years in archaeology this year – quite an achievement! John has a keen interest in Roman military archaeology and mentioned he runs occasional tours of Roman military Exeter. We were really keen to attend one of his tours and he kindly agreed to run one, which we organised as part of Heritage Open Days.

It was a fascinating event, transporting us back in time 2000 years to reimagine the Guildhall shopping centre as barrack blocks and Exeter Cathedral as the site of a Roman military bath-house. It was a unique opportunity for local people to see the location of excavation sites from the 1970s, with an archaeologist who worked on them. Here’s feedback from two of our eighteen participants:

We thought John Salvatore was an inspiring and imaginative speaker – he really made you ‘see’ the Romans in Exeter. The idea of walking the perimeter of the fortress was brilliant and to have a fully kitted-out Roman soldier describe daily life at the time was a real treat at the end of a terrific evening. Top marks to everyone involved.’

The second Heritage Open Days event was a guided tour of Dunkeswell Abbey, delving into the skills and masterful water management of the monks who lived and worked there. The tour was part of the Connecting the Culm project which aims to make the river better for wildlife and people, and more resilient to flood and drought.

Participants found out about the resourcefulness of the Cistercians, how they managed the water landscape in the medieval period and why they chose this beautiful rural site to build their abbey. We were kindly given access by a local resident to see the impressive earthwork remains of the fish ponds, astonishing in their scale.

The beautiful weather combined with the idyllic rural location and a pop-up cafe (run by local residents) selling tea and cake made this a perfect day out. We had a great turn out with 44 people attending the tours.